A few months back I heard about a new (old) game that’s been picking up some popularity and it sounded very interesting. The game is called Kubb and was supposedly invented by the vikings and sounded like a lot of fun so I decided I’d look for a set on the internet.

Oh it’s over $120 you say… and I have thousands of dollars worth of tools in my garage you say… well this won’t stand! It won’t stand I say! How can I be shopping online for wooden game sets!? To the El Granto cave!

The official dimensions are in metric (because Europe) where the dimensions I used for ease are in brackets in imperial (because Canada). You may notice I’ll switch between the units a bit. That’s because I wanted the Kubbs to be the proper size. Everything else (King and Batons) I felt okay taking small liberties with.

If you’re adding that up at all (which you probably didn’t cause that’s a whole mess of numbers) you can make this game set with just one 4″ x 4″ and some dowel rods. Off to Home Depot to grab some cedar!

First up as usual, cutting!

I chopped off the 12″ section for the king. Then I cut the remainder of the 4″ x 4″ in half for ease of handling and ran it through the table saw to make two 7cm x 7cm widths which I then cut down to their 15cm final lengths. I cut the 6 batons and the 4 posts to 12″ lengths and the cutting was done! 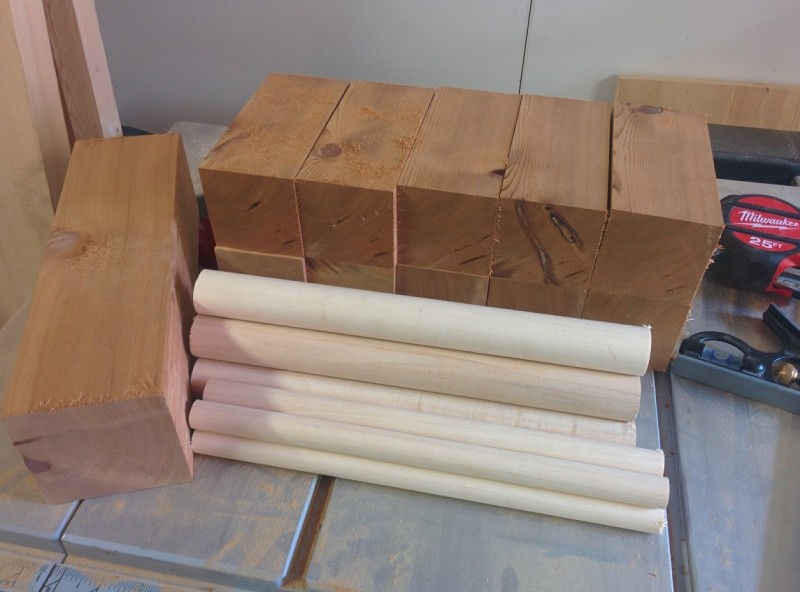 Then I set up the router and rounded over all the vertical edges on every piece. 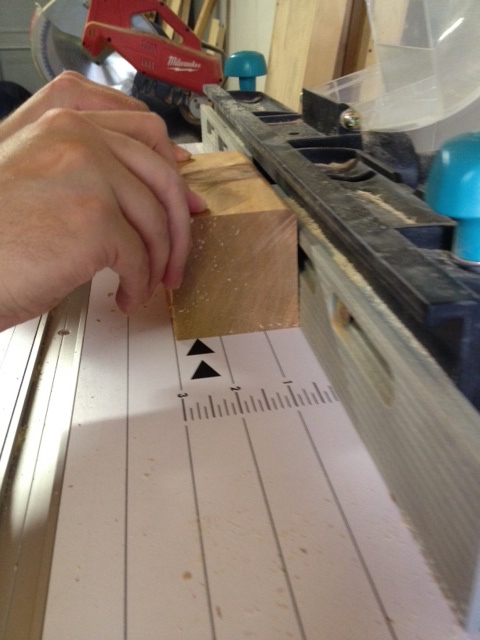 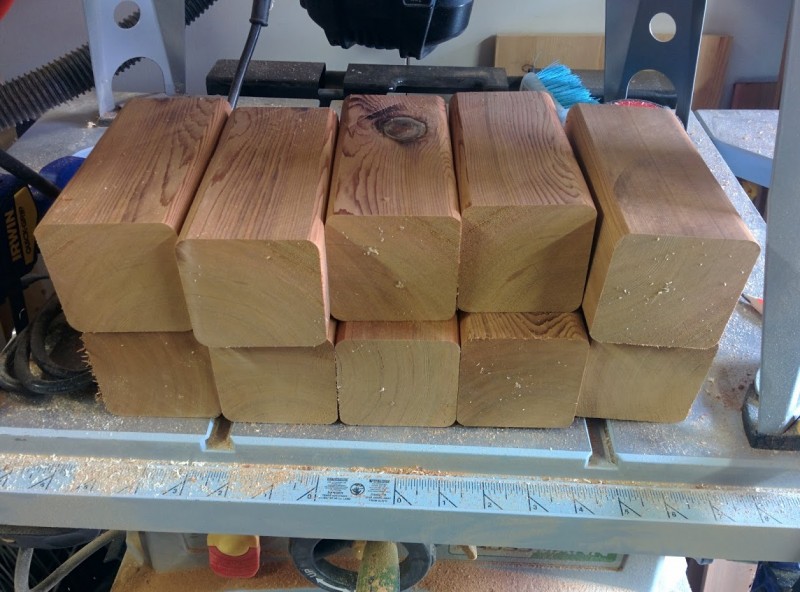 Kubb involves throwing batons and large blocks of wood at the other team. Well not AT the other team but in their direction. So I then gave the batons a rough taper on the ends so they don’t have sharp corners. 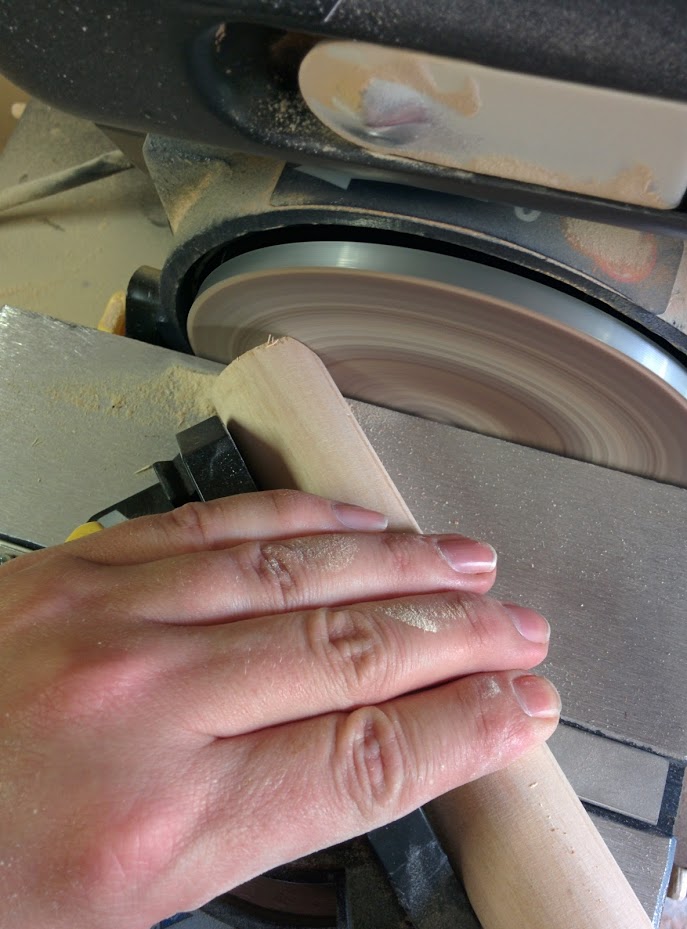 I also sharpened the ends of the corner posts so that they could be easily stuck in to the ground.

I drilled holes in the ends of the batons and corner posts so that they would stand on nails through a board and I painted and sealed the whole set. 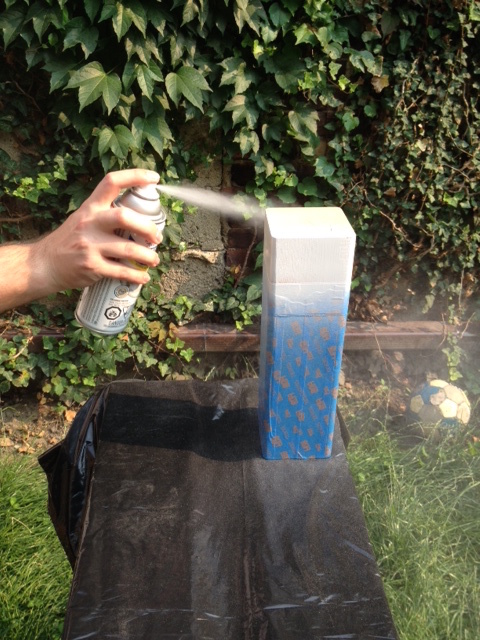 Red corner posts, white batons, and a nice white crown for the king. 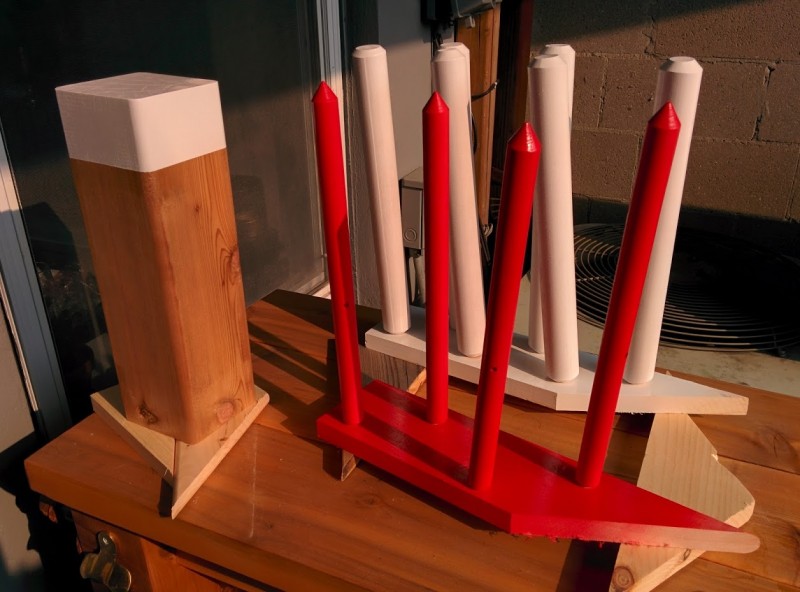 You’ll notice I only have four posts. This was a mistake I made. Center line posts are a handy addition and I may have to go back and make some. After a few games (and beverages) the king can start to drift from the middle of the pitch.

I taped off the top of the king and gave his lower area a coat of varnish to match the kubbs and taped off the ends of the batons and corner posts that were on the nails and finished them up as well. 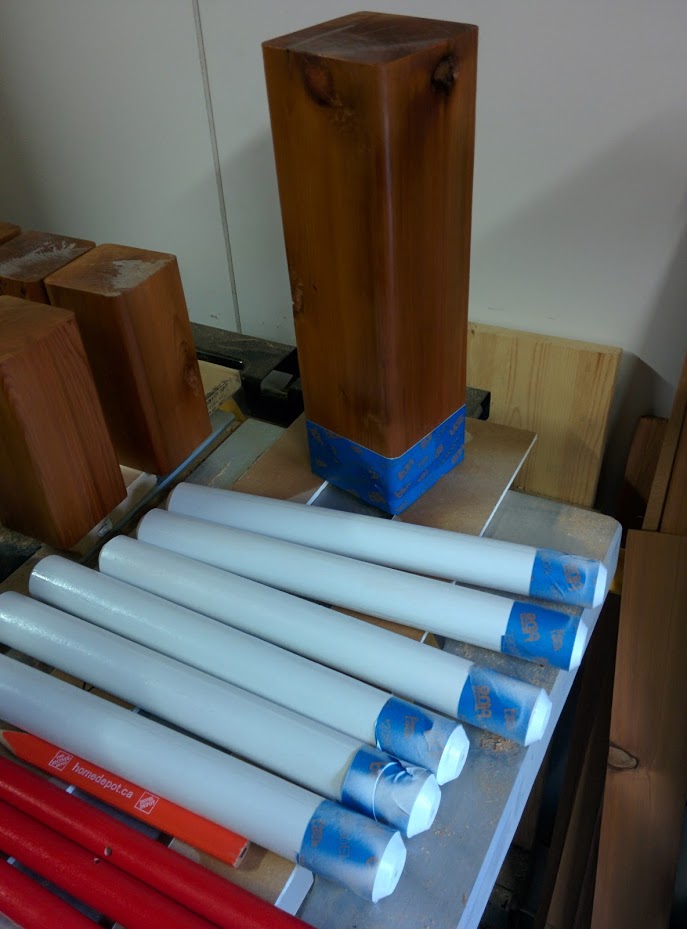 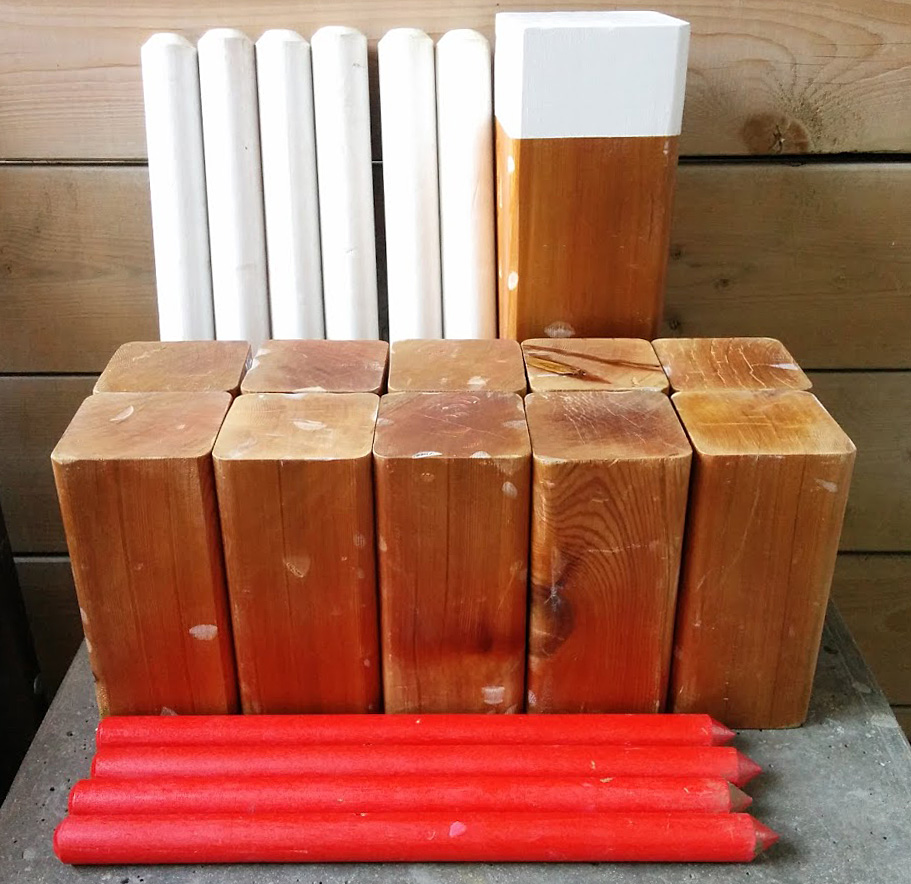 This game is a BLAST! It’s my new summer obsession and I have played well over 60 games already! For an afternoon of work it’s really worth it. The whole set fits easily in a backpack and it’s not very heavy. We even trucked it out to the island for a day out there and it’s done over 4 hours strapped to the back of the motorcycle for a cottage visit. 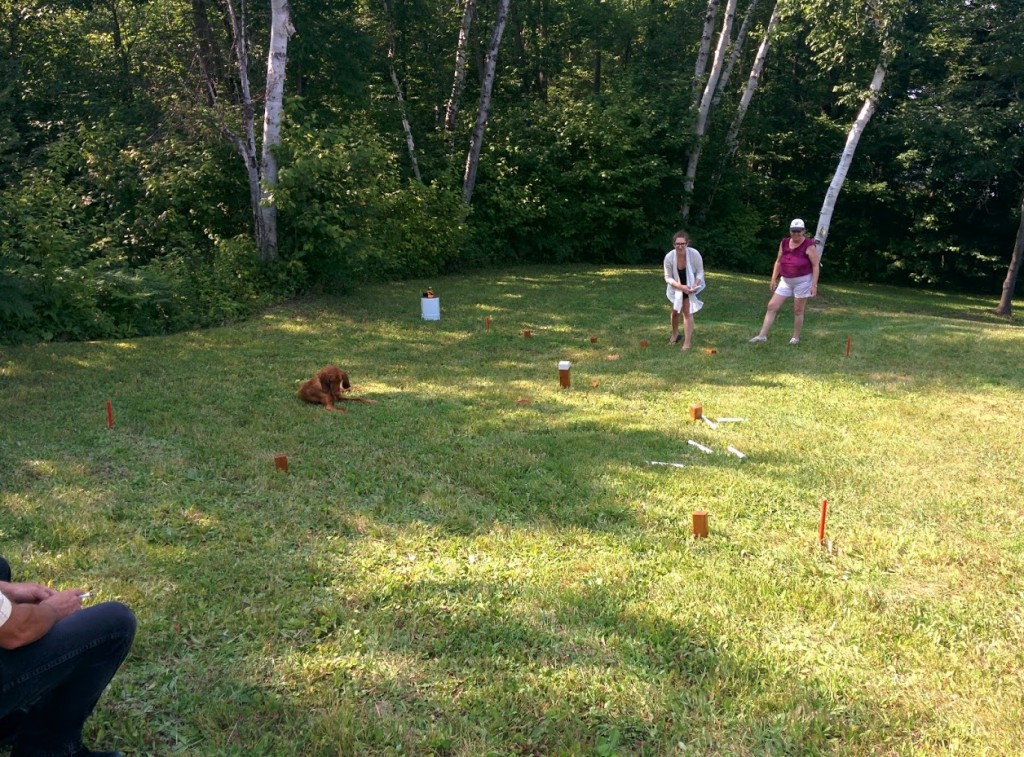 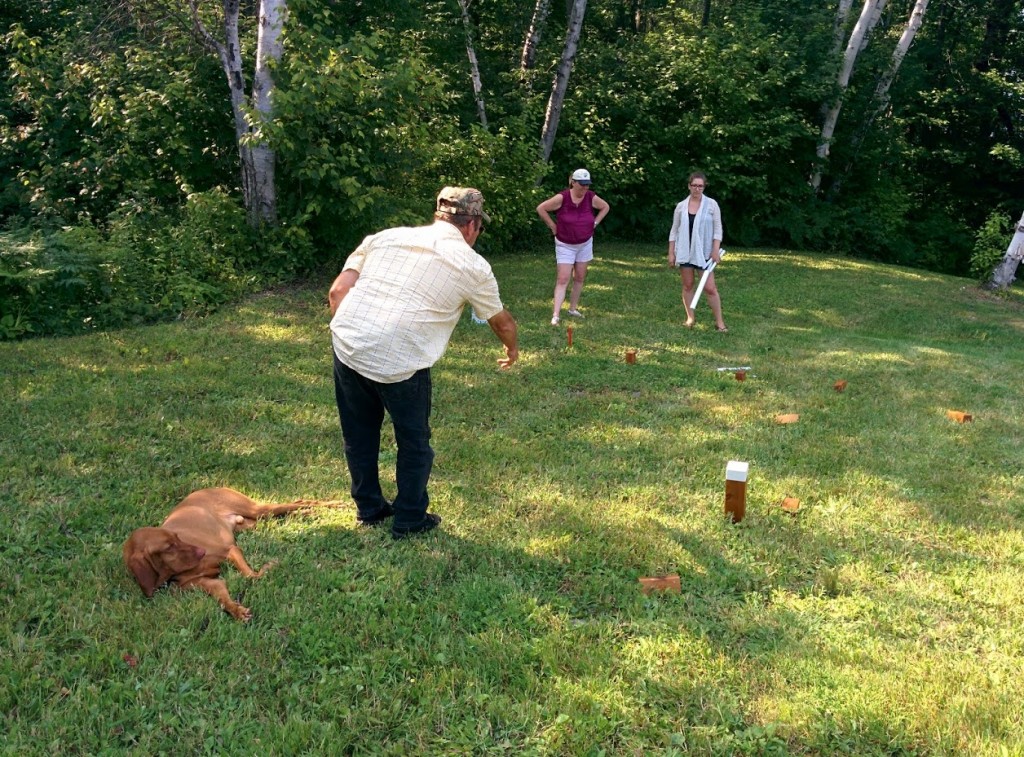 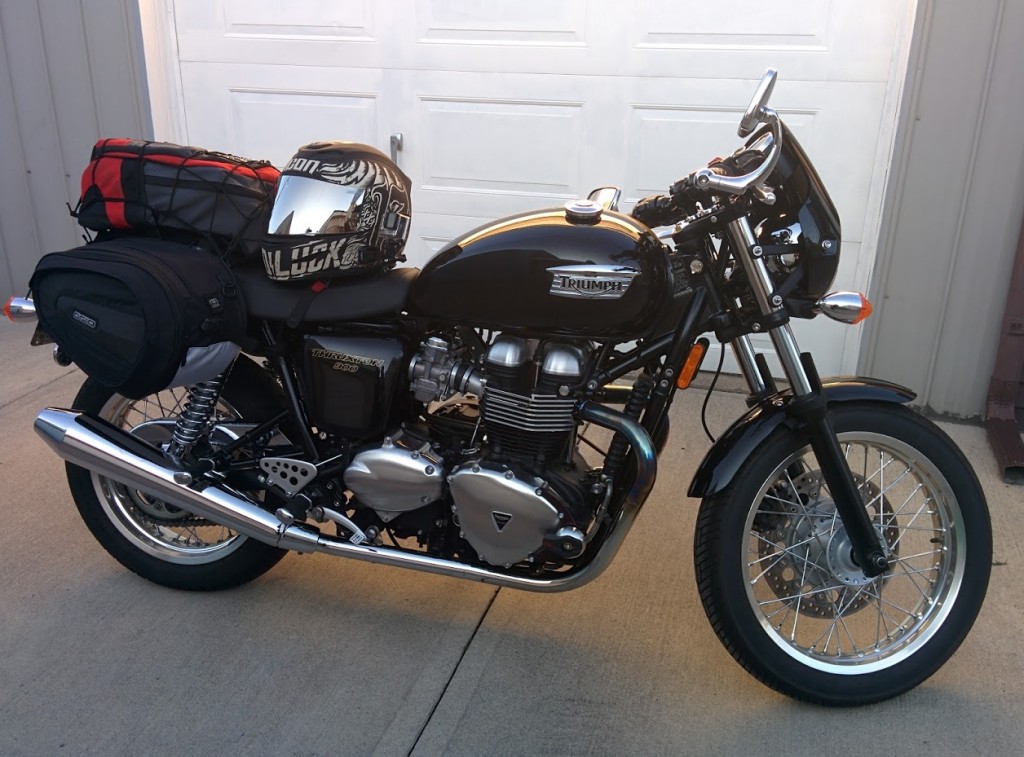 I swear there’s a Kubb set in this picture. It’s not just a shot of my pretty bike. It’s in the red backpack on top of the seat there.

This set has taken a beating and still looks great! We’ve gotten compliments from people in the park who know the game about how nice it is. We’ve also had strangers walk up and ask what the game is and where to get sets. There’s some sets out there that have some pretty creative tops carved on to the king. There’s some that are finished really nicely and there’s some that come in carrying cases. But you know what? As soon as you take this set out you start throwing the pieces at each other so I don’t think it needs to be really fancy. Maybe my next set will be fancy. We’ll see I do have some carrying case ideas… Everything needs a bottle opener right?

two out of five

Here’s a quick video to explain the rules of Kubb. It’s quite easy once you start playing. It usually only takes two games with an experienced player to become one yourself. The video doesn’t cover everything about Kubb though so if you want to learn I’d suggest reading the official US National Kubb Championships rules.

As with all of life there’s things that happen that you can’t plan for and there aren’t really rules for. Just last weekend I knocked over a field Kubb and it rolled and stood back up in a different spot. No one knew how to call it. Just keep it casual and fun.

P.S. If you would rather buy a set vs. make one, check out the best set I’ve seen thus far:

The Six-Pack-O-Kubb from Lumburr. Its carrying case is quite clever!!