One of my faults is that I am a bit of a dreamer. El Granto is the realist, and I have my head perpetually stuck in the clouds. I think we can do anything we put our minds to (within reason). I will research the hell out of things, and have confidence I can do a task before setting out. I may not however estimate how hard (mentally or physically) the task may be. I have confidence in our abilities, and often tooo much confidence.

Here are some examples:

Last night was another example. A nearby house is doing a bunch of renos, and I noticed some bricks in the construction debris.  I really want to make a backyard patio area with red bricks, so I stopped by and talked to the contractor and asked what they were doing with the bricks. Yesterday he gave us the all clear to come take as many bricks as we wanted. Awesomesauce! Now we just needed to get them home. El Granto tried to book a Zipcar van or truck, but as its the beginning of the month (and people are moving) there were no large vehicles available for the next few days.

Unperturbed by this, I convinced El Granto that we should go to the building site armed with a dolly, a granny cart, some milk crates and a bucket. We could fill up the containers with bricks, pile them into our dolly and cart and that we could make a few trips bringing bricks home. We loaded up the first cart worth, realized bricks weigh about 5lbs a piece, struggled home with them and swore to never do that again.

Hopefully this weekend we can bribe a truck owning friend with beer to help us shuttle the bricks. After they get home, and dry out, they will need some cleaning up, removal of mortar, and then hopefully they can become an awesome patio in the backyard this spring. 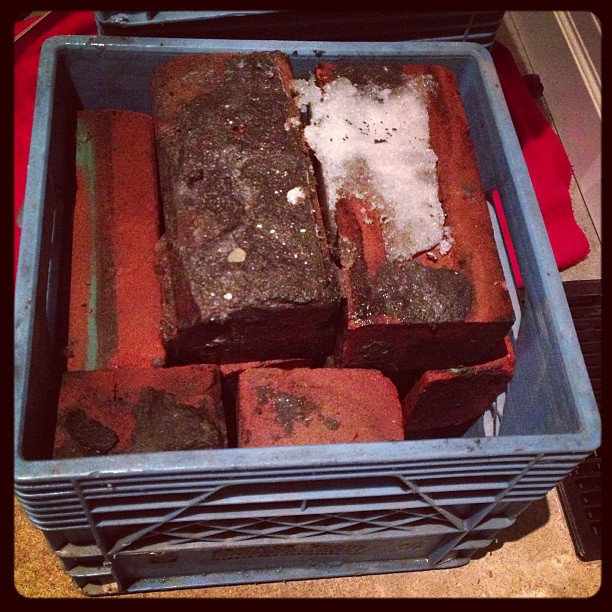 One milk crate holds 12 bricks. Each brick weighs 5lbs. So this crate-o-bricks is weighing in at 60lbs.

Have you taken on a task that’s too big (or heavy) lately?