What did you do this weekend? I spent my Sunday morning dumpster diving. 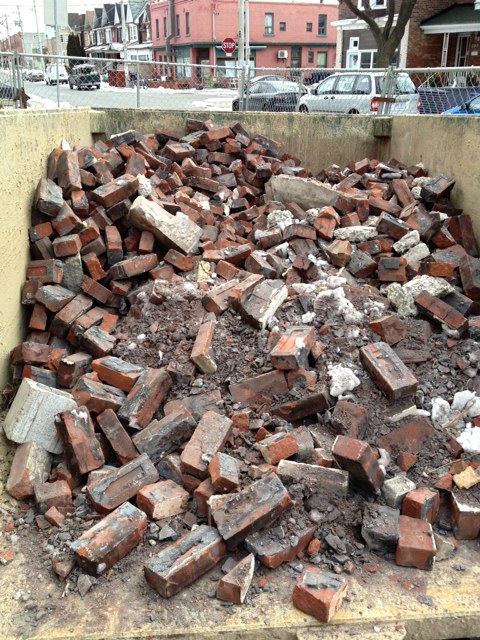 Another Storefront in the neighbourhood is demoing the front facade, and was junking a load of bricks. We want to make a cobblestone brick patio in the backyard, and saw our opportunity. We stopped in last week and asked if we could take the bricks off their hands. They obliged, and last week we attempted to cart bricks home with milk crates and an Ikea dolly. It didn’t go so well. So this weekend we called in the big guns, and a friend with a pick-up came to help us in our quest for brick.

We headed over to the job site bright and early and started pilfering bricks from the dumpster. My job was to unearth the good bricks, and stack them for the guys, who would carry them over to the truck. It was back breaking work, I don’t know how many broken bricks I went through to find the good ones.

We loaded apx 145 bricks into the truck each load. (about 750lbs worth of bricks) then drove to our house, unloaded them into the garage and went back for another load. After moving almost 300 bricks I couldn’t do any more. What little energy I had amassed in the last couple weeks was entirely spent. 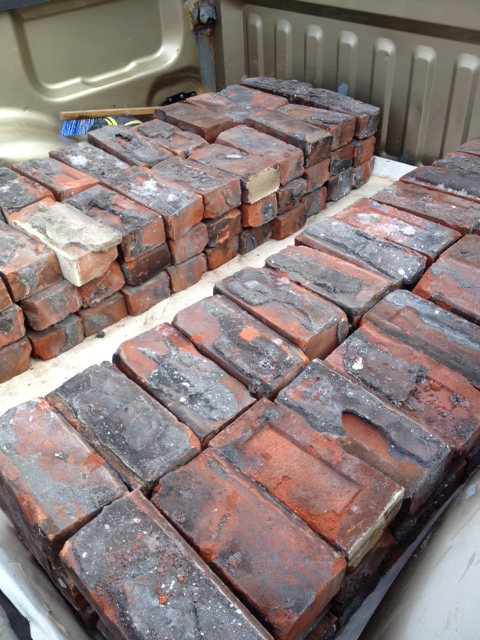 The bricks loaded into the truck

We don’t quite have enough bricks for the whole patio & walkway yet. We have 336 bricks currently, and for our patio we need 360. If we want to do a walkway to the garage, we need another 153 on top of that. Looks like we may be making another trip…

TIP! Want to know how I calculated our brick count? Our bricks are 8″x4″. To make one square foot of patio, you need 4.5 bricks. So just multiply the square footage of your patio by 4.5.

Getting the bricks stacked in the garage has gotten us excited for spring, and the prospect of our brick patio! Did you get up to any backbreaking labor this weekend? Are you pounding ibuprofens this Monday like we are? (ouch)