Having a dog is akin to having a gaggle of small children. You turn your back for one second, and they can manage to ruin more stuff than the Tasmanian Devil.

Enter last weekend, when on a whirlwind (pun intended) of home maintenance, I was using Great Stuff expanding foam to fill in some holes on the exterior of the Storefront and the garage. The garage door had quite a few gaps between the frame and the cinderblock, and I was filling them up with spray foam to keep out any unwanted bugs, creatures, neighbors, as well as prep the garage for insulation.

I had sprayed one whole side of the door, and was up on the ladder spraying the other side when I heard El Granto exclaim “ODIN! What are you doing?!” His voice had an unequivocal edge to it, so I instantly knew it wasn’t a “did you poop in the alleyway” kind of problem. It could only mean an actual, legitimate, serious problem. I looked down and Odin was on the end of his leash, trying to make his way into the alley. He had pressed himself against the garage wall in an effort to see around the corner (and chase squirrels I’d imagine). In his plan of escape he had pressed himself so closely to the wall, that he had in fact rubbed his face, ear and neck into the wet expanding foam.

If you have seen Odin before you will know that his giant velvet soft ears are his crowning glory. His pièce de résistance. His lady killer ears. Those things are so big that Odin is anything but breed standard Vizsla. They are the thing we fell in love with when we met Odin as a puppy.

We panicked. Would it burn his skin? Did he eat any? Is his hair going to fall out?

It was a Saturday of the long weekend, rushing him to a vet wasn’t the best option. We needed to figure out how to remove the wet foam before it dried and was (cue dramatic reading) stuck forever.

I ran to the Great Stuff container (cause I’m a direction reader) and low and behold it gives you clear instructions on of what to do if you get it on your skin. I figured dogs are close enough to humans. They have skin and hair errr fur. So good enough! Okay, all we have to do is  “remove with acetone”. Acetone? Why would I have acetone? That’s not part of my standard garage chemicals. I mean I’ve got varsol and paint thinner, but acetone….not in the garage.

We removed the spray foam from Odin’s skin and hair like it was a bad manicure.

After we were finished, we rinsed him off with warm water, and shampooed and conditioned him with his soothing oatmeal boutique dog shampoo. (Yes, yes I know, we’re yuppie dog owners who treat their dog like a child, I’m fine with it.)

By the end of it, there was clumps of dog hair littering the tub, a dog with bits of spray foam still lodged in his hair, and two very unimpressed dog owners. El Granto even had the foresight to snap a pic of the dog & I in the throws of foam removal. You can see the enjoyment in both our faces. 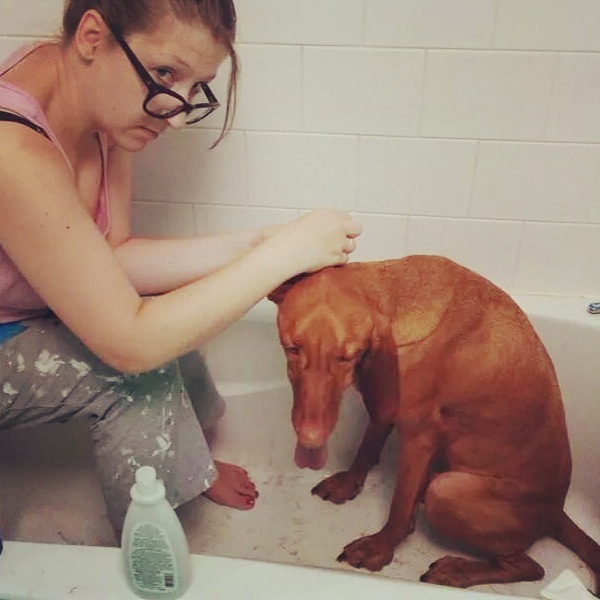 But Odin was alive, not burned or maimed, or missing an ear. The only evidence of  foamagedden was the few errant bits stuck in his hair. He didn’t break out in a rash, have shortness of breath or do anything else scary enough to warrant a trip to to the 24 hour vet.

Shortly after his bath after everyone had calmed down he was again a happy pup sitting in the sun. 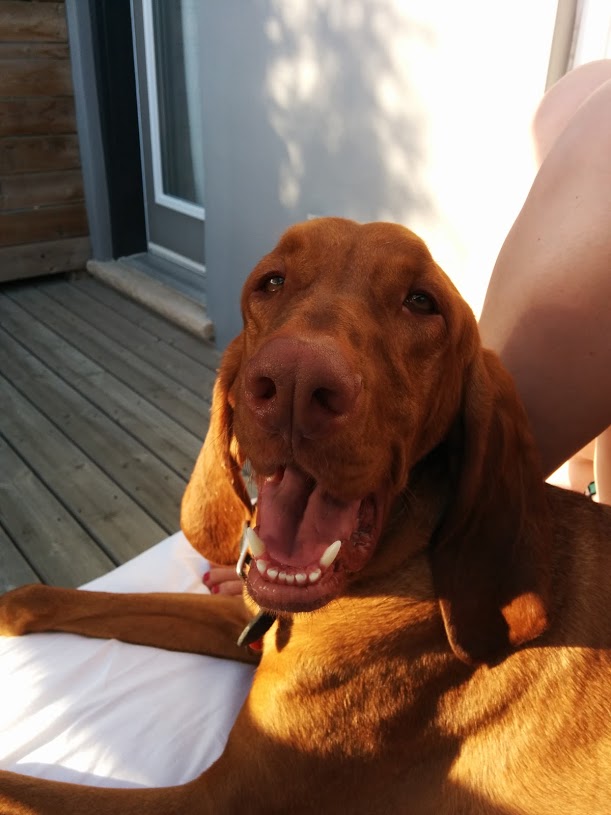 So there you have it. Use acetone (or acetone nail polish remover) to remove Great Stuff Expanding Foam from your hair or your fur. Hey, we’re not judging, that sweater vest of chest hair you’ve got going on could certainly be considered fur. And yes, I’m a good enough friend to not bring up your mustache or back hair.

Oh and don’t be stupid, call poison control if you get any in your eye, nose, mouth,  or any other hole (again…not judging). Well…maybe a little.