For those of you new here, I was diagnosed with Celiac Disease a few months ago and have been forced into a gluten free diet for life. I say forced, cause no one on earth would choose this limited diet. I apologize for the personal post, but as this is a big part of my life now I feel strange about not sharing it with you. If you’re looking for DIY, skip this and come back tomorrow! (*and a warning, there is a photo of the IV, if you’re squeemish you may want to bail out!)

This week I underwent the first of many iron infusions. An iron infusion is not a shot of iron, but instead a large dose of iron on a slow drip into your blood stream. The infusions use the same machinery as chemo treatment, and are infused the same way over a 3-4 hour time span.

I headed to the hospital bright and early excited and with trepidation for my treatment. I was excited, because I have been feeling so terrible for the last 6+ months that I am excited to start feeling better again. Essentially my iron (and other vitamin & nutrients) were so depleted that my body was unable to produce normal red blood cells (they were small and not round). Red blood cells are used, well, for a lot of things but mostly to carry oxygen around your body. So with a low count of crappy red blood cells, I was experiencing extreme exhaustion, fatigue, brain fog, and got winded just walking up the stairs.

The trepidation was that I had heard horror stories about iron infusions gone bad (WHY DO I GOOGLE THINGS?!). The most common side effect is severe joint pain, and allergic reactions. I am glad I knew this going in, but it didn’t scare me any less! 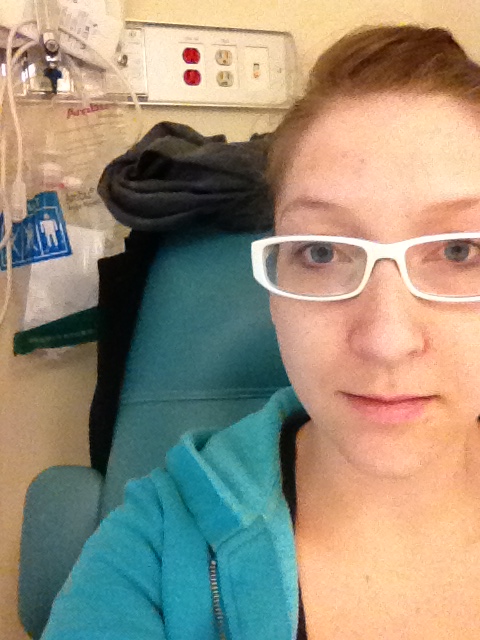 An iphone selfie right before the IV. Do I look scared?

The worst part is getting the IV in. It took three tries, and they ended up having to go in at the inside of my elbow, which is an awkward place! 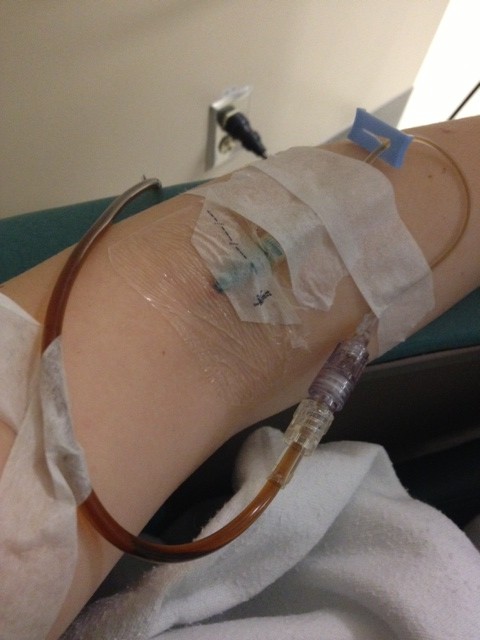 The IV (that’s the iron in the hose)

Once the IV was in, everything else was easy as pie! Because of the likelihood of allergic reactions (anything from itching at the injection site to anaphylactic shock) they do a test run with a low dose to see how you react. I experienced no negative reaction. Because I did so well, they elected to not give me benedryl. Which is great! (the benedryl can kick you on to your butt making you tired and useless for the next two days.) After my test dose they set me for the rest of my infusion. The whole process took about 5 hours total (they monitor you for about 30 mins afterwards to make sure you don’t explode or die or anything.) 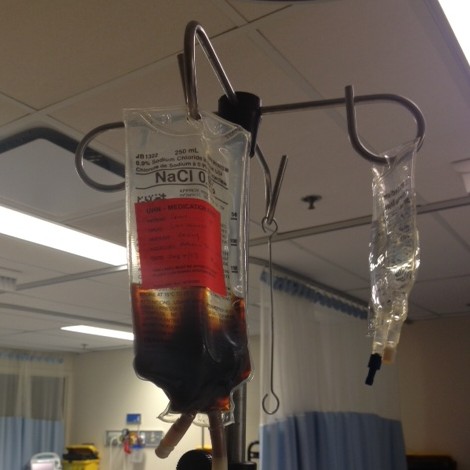 The Iron (yep, its the color of rust!)

Here’s my advice if you’re heading in for iron infusions. Take the whole day off work. Dress comfortably and warmly such as lululemons & a vest (hoodies are useless as you have to take them off for the IV & the blood pressure cuff). Bring a drink & a snack (you’ll be there a while!), a book, iphone or tablet and some music is a must. Also bring some kleenex, you will probably be the only person in the ward not going through chemo, and your heart will break at the struggle your new friends are going through. Warn your employer that you may be off the next day as well. Depending which form of iron they give you, the side effects can increase dramatically.

The  next day I am tired and stiff, but I am excited to (hopefully) be feeling more energized soon! I feel like my trip to the hospital was like taking a car in for service and getting a new battery.