From Billy to Built-Ins

Our house is a three bedroom, two large bedrooms and one smaller. The smaller is of course the best choice for either an office or nursery. We wanted to plan for an office now, and if we ever needed it down the road, an easy transition to a nursery. 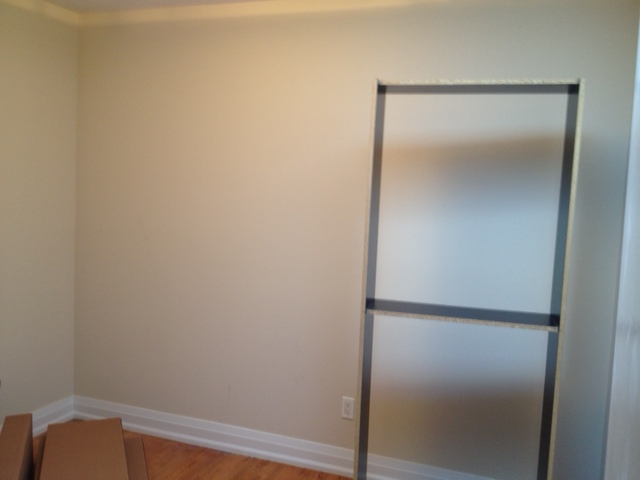 Office Before (sorry about erroneous bookshelf in the way!)

The space is 10.5’x8′, has a single closet and a skylight. We wanted to build in some storage, as we have a ton of books and decorative pieces that don’t really fit into our open concept main floor. After researching our options, (and doing a lot of Pinterest-ing) we decided to build a wall of Ikea Billy bookcases.

We already owned a black full size Billy, and originally were just going to purchase more of these. However, we learned that we had bought the “cheap” black one (not the black/brown wood grain one) and there were NO matching pieces to go along with it. So, we either had to throw out our current Billy and start new, or re-use the black one somehow. After much debate, and seeing how awesome a job they did over at 247reno.ca we decided to do a Billy Built-In, trimming them out and painting to get a nice custom look.

This meant acquiring 1 more Billy full size, 3 skinny Billy‘s, and the 5 corresponding height extension units. On a trip to the states I found all the height extensions on clearance for $5 each, so that saved us a ton of money. We then purchased the additional pieces from our local Ikea.

We assembled them all (without shelves or backs) and started to prime. 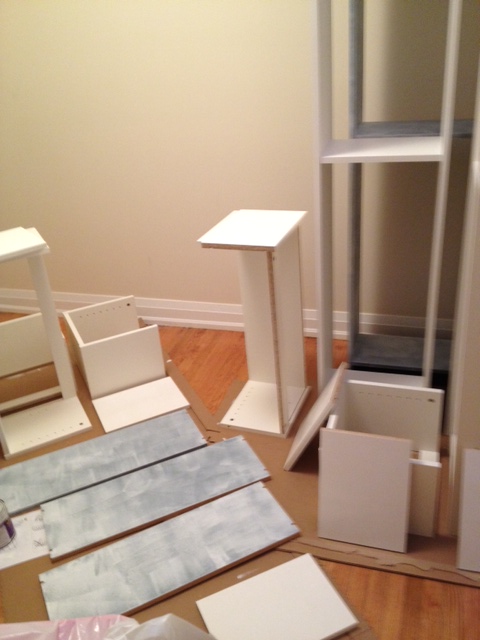 I used Behr’s Enamel Primer & Undercoater. It is good for all surfaces, including glossy ones. I figured I was free and clear to prime willy-nilly. NOT SO, apparently the finish the the height extensions and the sides of one of the bookcases was made from a more glossy or waxy finish, and the primer refused to stick… SO… out came the sandpaper. I removed all the primer and scuffed up the surface. I then cleaned and re-primed, which still produced mediocre results. I still wasn’t completely happy, but decided I (and my sanity) had enough priming, and would deal with it later.

Now for the bookcase backs; the full size Billy’s backs come folded into 3 panels, and when assembled look like cheap ass Ikea bookcases. So we measured them (30.5″ x 76.5″) and went to our local Home Depot and got 1/8″ hardboard cut to size. I then sanded and primed it, and it slid into the bookcase grooves perfectly, and looks MUCH better! We also replaced the height extension backs, as they were made from a more flimsy cardboard, and attached the extensions to the bookcases.

We wanted to remove the baseboard on the the wall the bookcase was going for two reasons. One: so we could get the bookcases closer to the wall and two: so that we could re-use the piece of baseboard. We scored the caulking/paint that was existing on the top of the baseboard and carefully pried the baseboard from the wall, very very careful not to damage it. 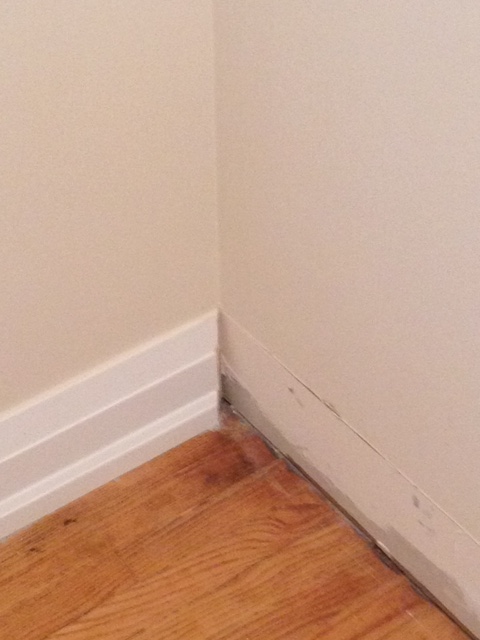 We then built the platform for the billy’s out of 2×3 pine (so that they would be off the ground enough for our baseboard to sit flush). We secured the base to the the studs in the wall (but not to the floor in case someone ever wants to remove the bookcases).  We then placed the bookcases on the base and decided on spacing. 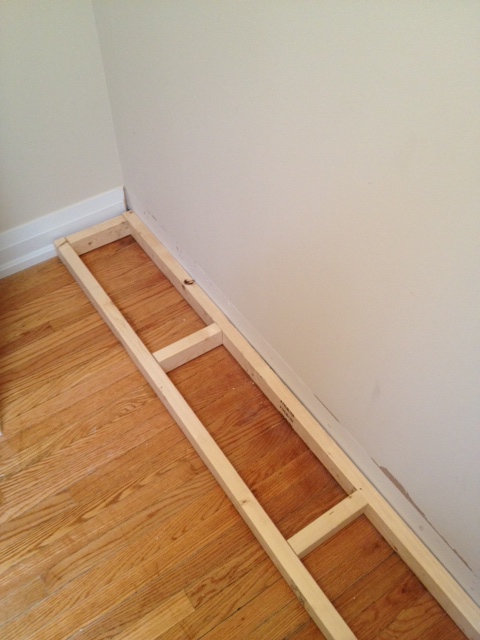 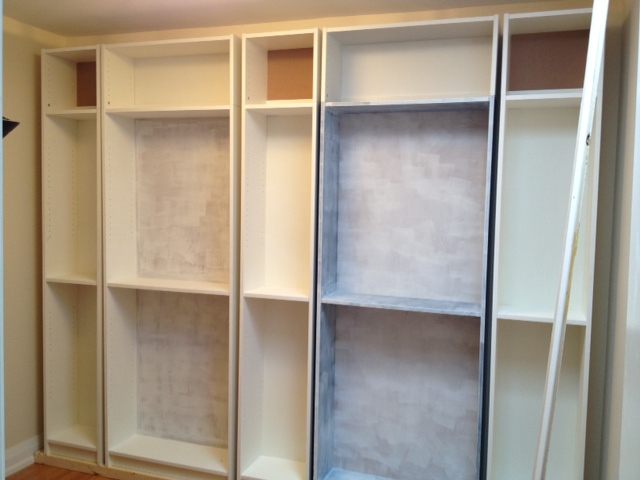 Billy’s Placed On the Base and Approximately Spaced 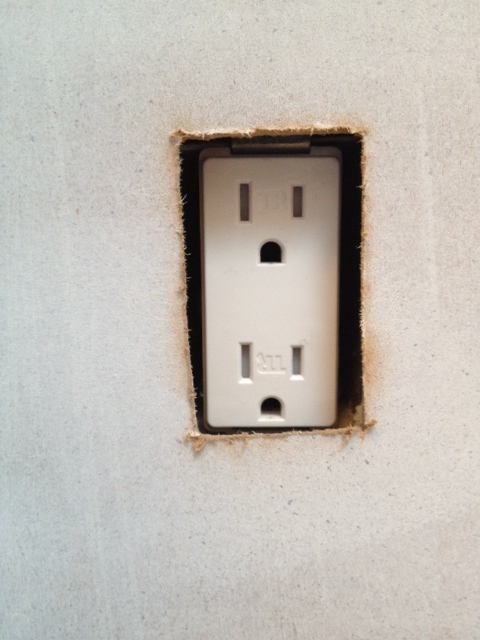 Cutting out a hole for the electrical outlet 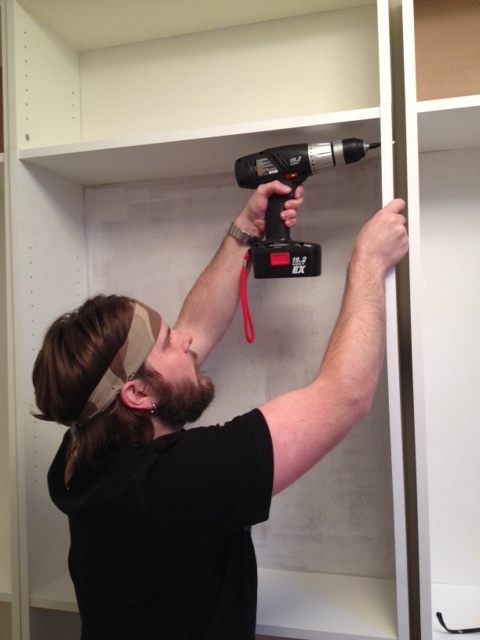 We had found some 1/4″ x 2″ trim that we liked, so we spaced the bookcases 1/2″ apart. We cut 1/2″ spacers out of plywood, and attached all the Billy’s together with the spacers and some screws. 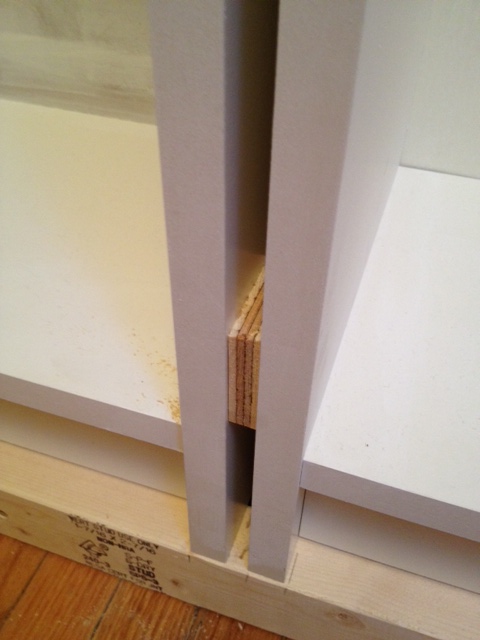 We then secured everything together with 2 x 4’s running along top of the bookcases and screwed them into each bookcase. This made one very solid piece. 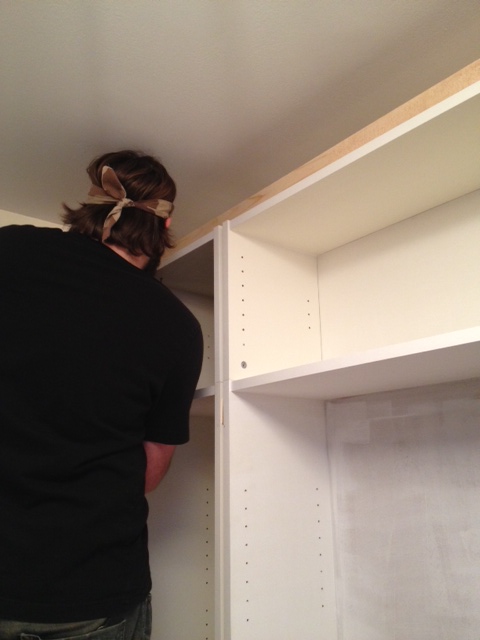 We attached the bookcase to the wall with the Ikea provided L brackets, and to the base with the same L brackets. If you plan on doing this yourself, think ahead to how much space you’re gonna have left between the bookcase and the ceiling. We had about 6″, which seems like a lot, but it was SUCH a pain to put in the L brackets. We should have pre-attached them to the bookcases before we’d set them in place. You could only fit a stubby screw driver in there, and I lost many a screw that fell behind the bookcase!

We notched out the baseboard on the side walls with the oscillating multi-tool, and inserted the baseboard back in, and secured with brad nails. Now its time for the pretty stuff! 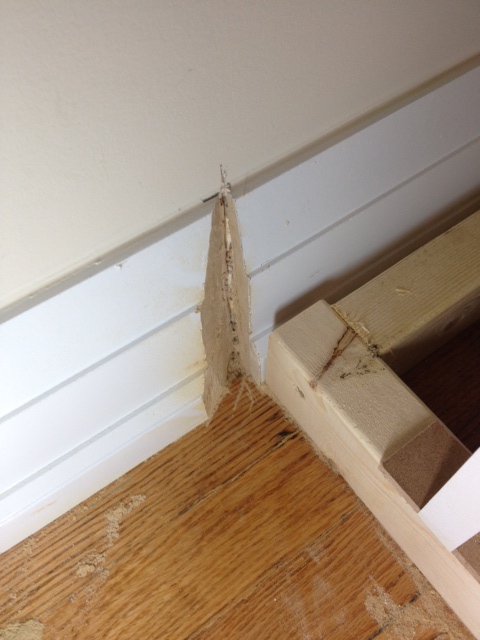 The Baseboard Notched Out

We attached all trim with brad nailer. We also picked up some 1/4″ x 2″ polar trim, and used it to fill the gaps at the bottom where the shelves are inset into the bookcase, and the baseboard left a gap. We also decided to trim out the center and top shelves with more of this trim. 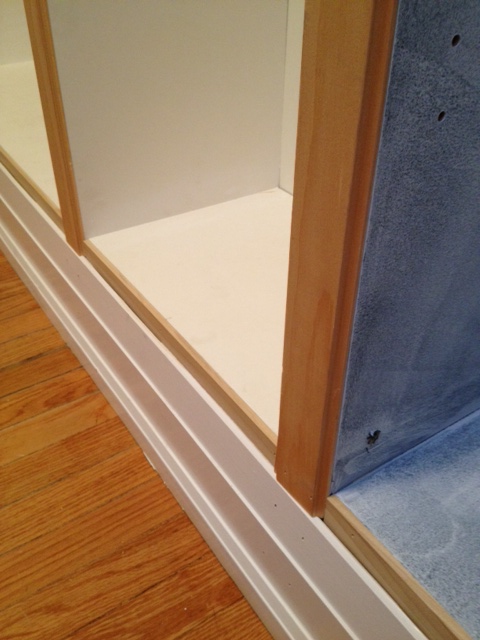 We then went on a hunting expedition to find the perfect sized crown molding. This was problematic, as we need some big big molding and our house isn’t even close to level or square. The ceiling is over 1″ taller on one side of the room, so we needed something that would cover that gap, but not dip into the bookcase. We ended up finding some great molding in a dusty corner (literally!) of our favourite local lumber store; Downtown Lumber. We nailed up the crown as best we could, dealing with the terribly unlevel room. We used more of the poplar trim to fill the spaces and considering what we were dealing with, it looks pretty good!

We then had a gap of 5″ or so on each side of the bookcase to the wall. We rip cut some MDF boards, then scribed them to the very crooked wall, installed and trimmed. At this point in time we also installed the chair rail (click for chair rail post). 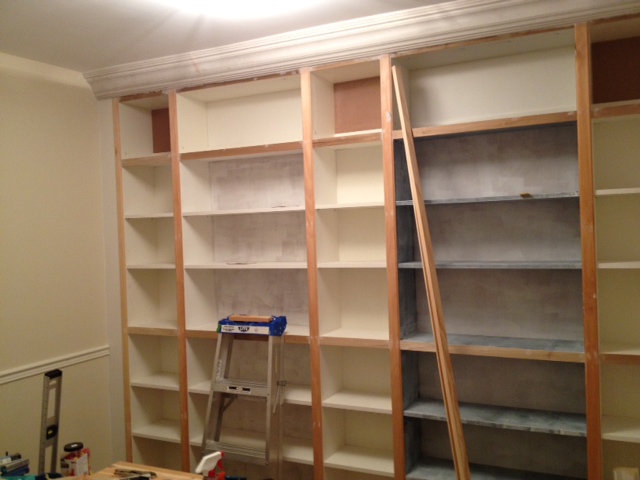 The Bookcase with its Trim and Moldings Installed

As we really wanted a built in look, we decided to fill all the unused shelf holes (this really makes a difference!) We used DAP paintable caulking to painstakingly fill all the shelf holes, as well as all the screw and nail holes, and small gaps around trim. This was tedious work, but really polished the entire piece. We also had a very good helper who was ever so eager to get in on the action. 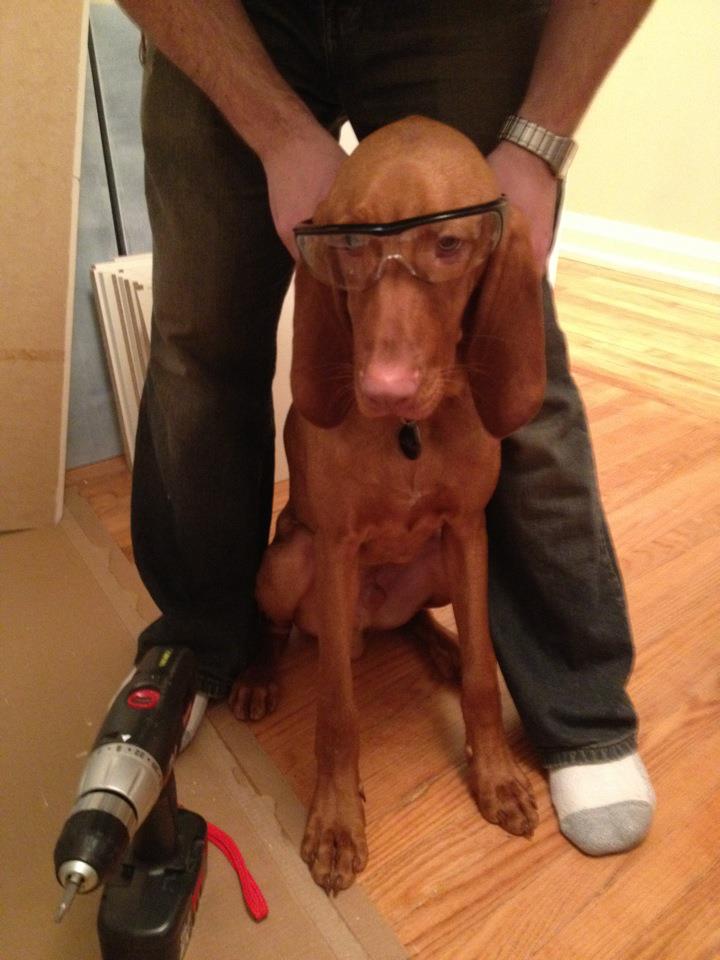 Odin helping with the Reno

Now comes the fun bit (enter sarcasm). We installed all the shelves and painted another coat of good primer over the entire bookcase (we learned our lesson, and this time we used Zinnser BIN primer, and it was so much better than the Behr, but use in a well ventilated area, and stir stir stir it). One coat of primer took over 8 hours to complete (really). Over the next few weeks, we followed it up with 3 coats of high gloss white interior/exterior paint, and an extra 2 coats on the previously black bookcase.

After many trips to the hardware store for more paint, lots of sore muscles, and an incredibly upset puppy who was made to hang out in the hallway behind a baby gate while we were working, it was finally done! 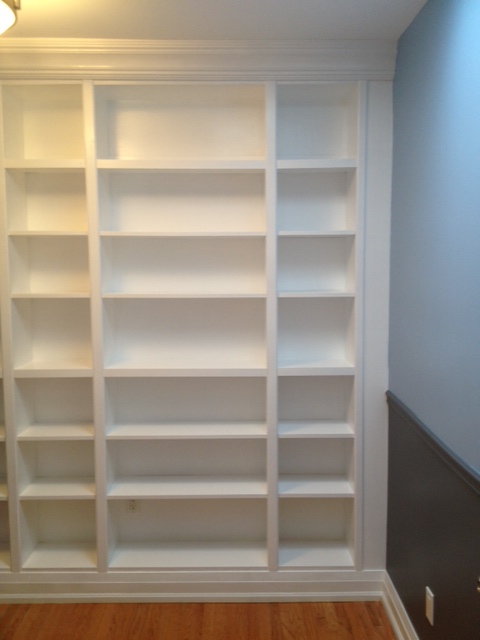 The Right Side of the Bookcase 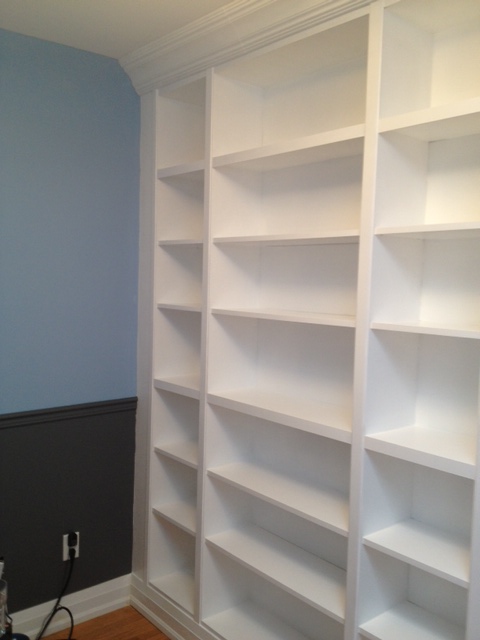 Left Side of Bookcase 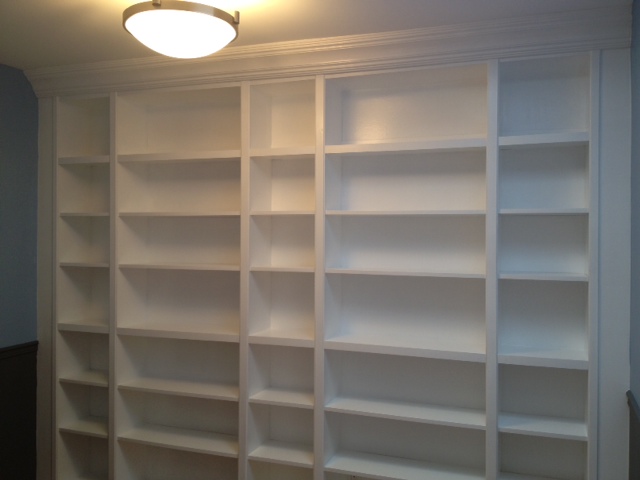 I promise I will have a FINISHED Bookcase post to come!
*Check out the Pallet Crates we made to fit in the bookcases here. 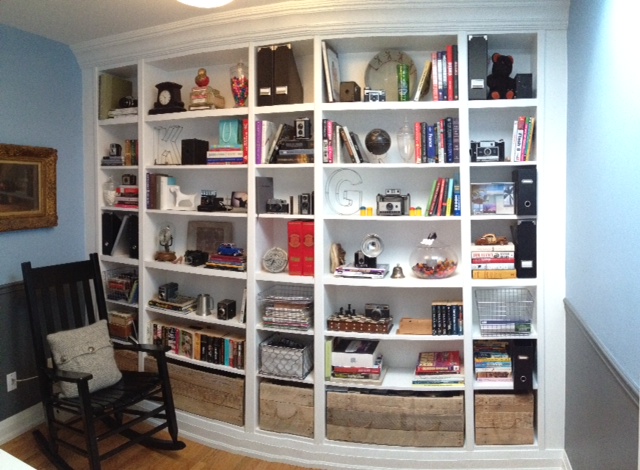 Its hard to get a shot of the whole bookcase in such a little room! Sorry about the wide angle!