In the last 5 years our lives have gone through a lot of change. We got engaged, married, bought a house, got a dog etc. We became grown ups (well as much as we ever could). In the midst of saving for and paying for all these large milestones, one of El Granto’s passions got put on the backburner.

El Granto loves motorcycles. Especially the cafe racer variety. He purchased his first motorcycle about 7 years ago. A 1972 Honda CB360 lovingly named Penelope. She was a good little bike, but as she was 40 years old she needed some help. He had her running well for a while but when the above mentioned real life things came up, poor Penelope started to show her age. She ended up needing more work than was viable, and last spring El Granto sadly put her up for sale.

Ever since that day, the poor guy has had a sadness in his eyes when he watches a cafe racer (or any bike really) drive by on a sunny summer day. He looks wistfully at our friends motorcycles stored in our garage. He had new motorcycles set as his desktop wallpaper and I often caught him pricing out new bikes and doing quiet math sorting figures and determining how much he would have to save to make a new bike a reality.

After 3+ years of saving his pennies, El Granto has finally made his dream a reality. This past Saturday a truck and trailer pulled up in our neighbourhood and a nice man unloaded a shiny new 2014 Triumph Thruxton 900 and started it up. The odometer stated 000000km’s and the man handed El Granto a folio and a set of keys and said “She’s all yours.”

The grin on his face was priceless. More excited than a kid on Christmas, El Granto had gotten his dream new toy (I may have even seen a tear). He walked around it looking at all its shiny chrome and listening to the purr of the engine. He donned his helmet and gloves and took her around the block coming back to the garage with his horn blaring getting our neighbours to come out and see the new toy!

As it’s still (woefully) winter here in Toronto, he had to unfortunately pack her away in the garage and wait for spring.

I have caught him out there in the cold garage with a light on happily sitting on his new bike. Playing with the steering lock, or removing the cowl. He can’t wait for sunshine and dry pavement, and I can’t wait to see his smile as he revs her up and takes her for a spin. 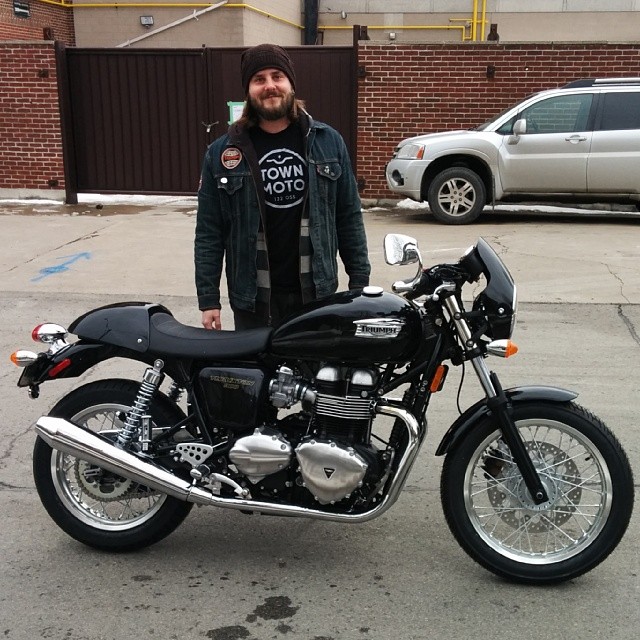