The pathway & lawn are done. I may have killed El Granto in the process, but they’re done.

No really, El Granto is a wreck. I think the sheer amount of sunlight, heat & heavy lifting was too much for the poor Englishman. He’s got a bit of heat exhaustion, and is spending the day in the a/c topping up his fluids. I feel like a bit of a jerk, cause my girly muscles couldn’t really help him as much as I would have liked.

Here is what we accomplished, although it doesn’t look like much, it was an absolute ton of work. 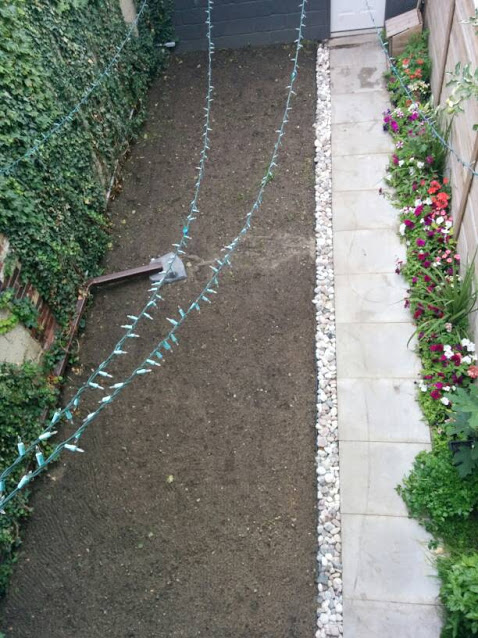 Recap from last weekends progress: We took up the path, laid down new rock bedding, and re-laid the pathway, this time with the concrete pavers upside down.

Now, here’s what we did this weekend:

We rented a rototiller, and tilled the whole lawn. Yep, the whole thing, even where we had bits of grass growing. We wanted a fresh clean start, and to get our really packed down lawn a loosening up, and re-grading. 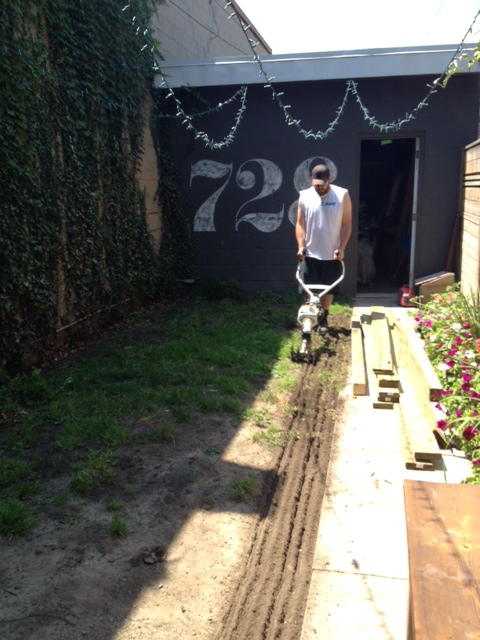 While we were tilling, we ran into a few err rocks. As I started to dig further to get the rocks out, we realized the back half of the lawn was filled with rubble, and then topped with a tiny bit of topsoil. We’re not talking a few stones, we’re talking a bunch of whole bricks, chunks of concrete and other junk. We dug them all out, and bagged them up. They will go out with our trash in our Bagster in the next week or so. 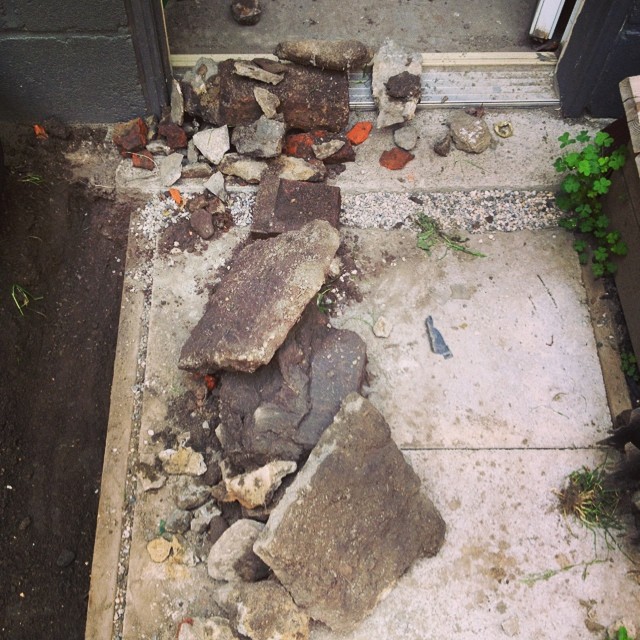 After we tilled and removed the junk, we dug out a trough beside the pathway. 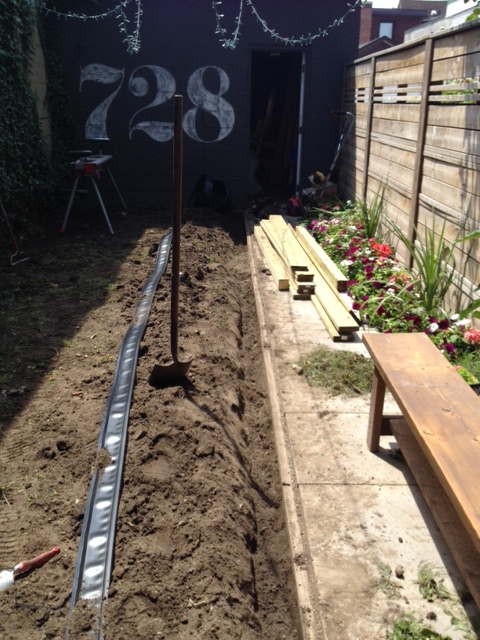 We edged it with plastic edging, and lined it with landscaping fabric. 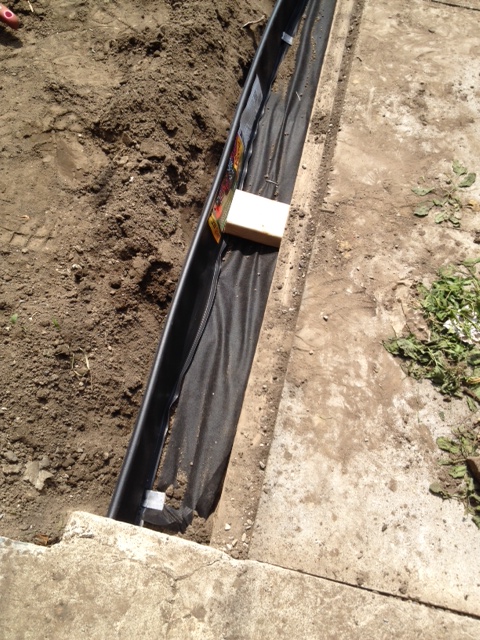 We used 4 1/2″ wood blocks as spacers to try to get the edging laid evenly. That plastic edging however does not like to lay straight.

We then filled the trough with large river rock. This will not only be good for drainage, but it also gives a nice custom look to the otherwise cheapo concrete path. Like putting lipstick on a pig. You know its still a pig, but at least you’ve got something else to look at. 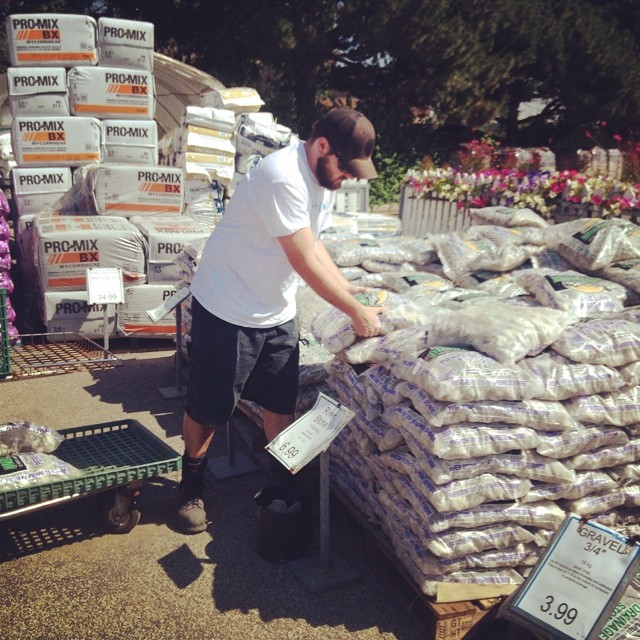 Trip to the garden center for 13 bags of large river rock. All told we have 25 bags of rock under and beside the path. Wowza. 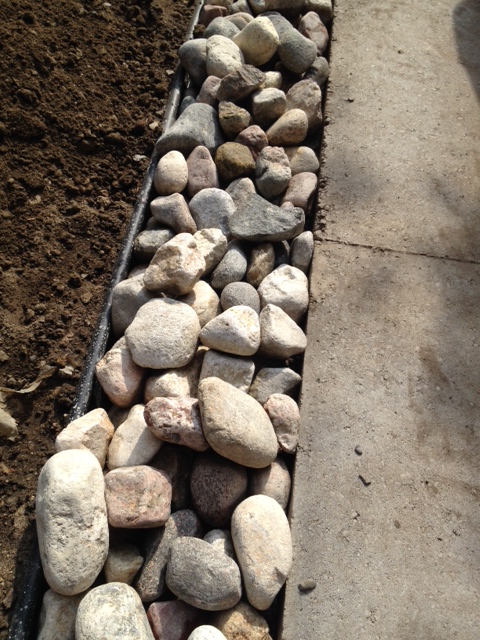 After the rocks were laid, we raked and re-graded the lawn, and seeded it. We used a combination of sun/shade grass seed and white clover, and used an old EZ seed container we had laying around to distribute the seed. 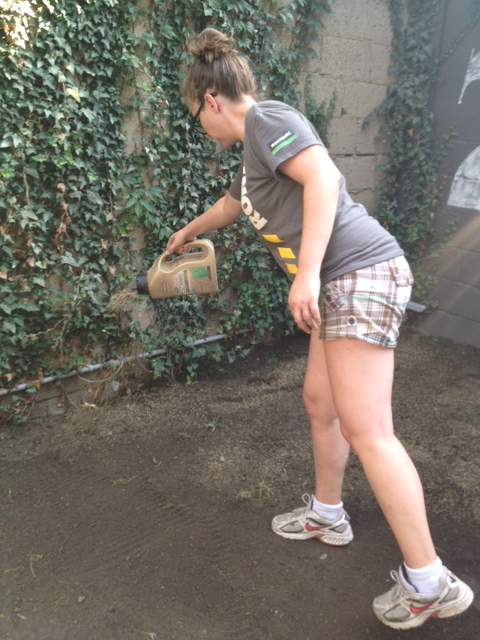 Seeding the Lawn (and looking awkward.)

After we seeded, we raked over the lawn, and have been watering perpetually ever since. It isn’t ideal to seed in July, but we will try our hardest to make this grass & clover grow! For the next couple weeks, Odin is blocked from the yard, and we will have to do walks for all his dog needs. Hopefully this will actually give the lawn a shot to get going! 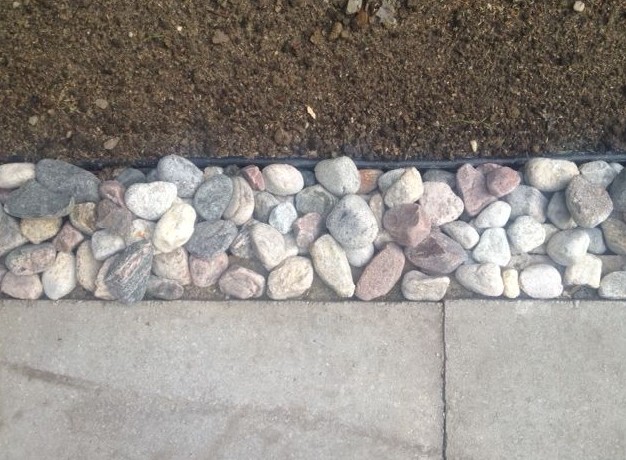 A full reveal is a few weeks away. We’ve gotta turn this dirt patch into a lawn. You can follow along on grass watch 2014 on Instagram. Cause you know, watching grass grow is super interesting. We know how to party round here!

We also got started on our deck pergola. An update will come on that later this week!

Excuse me while I go mow down on copious amounts of ibuprofen.