This week marks the anniversary of closing on our house. This week I will share with you with some of our house buying ups and downs. Today’s topic is about how we almost didn’t go see the house at all.

The Storefront you see was on the walking path to El Granto’s work. Every day he walked past the house and he knew exactly which one it was when I sent him the listing. He said. “NO, that place is a dump, we’re not going to see it”. I said “What?! Look how nice the photos look!” And he told me to look it up on google streetview.

Eeek. That DID look pretty bad. Then El Granto dropped the bomb that for the last year or so it had been boarded up, and was covered in errant graffitti. Double Eeek.

But…this was the pic on the listing: 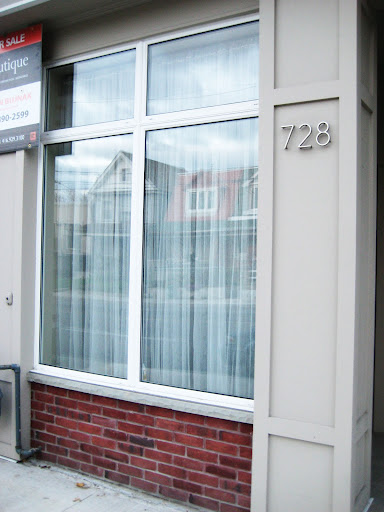 El Granto still insisted it was a dump, and we had been through a lot of dumps lately. This was just weeks after we had viewed a hoarder’s house and a moth ball laced home that we couldn’t even breathe in…

But I persisted. The house was right by the subway and we had to meet our agent at the subway anyways. Why not just schedule it as our first viewing and we would quickly pop in? El Granto grumbled about it being a waste of time, it only being 12.5′ wide, and on a main street etc. To get me off his back he gave in, and we had our agent schedule a viewing.

I got to the viewing late and I walked up to the front of the house to find it looking just as pretty as the listing pic. No graffiti, no boarded windows, no hobos.  I opened the front door to find a BEAMING El Granto. He looked like a cat who swallowed a canary. I quickly did a tour of the house to discover that holy crap, it was great! A brilliant use of space, the rooms were laid out just how we would have done it, and it had a nice new kitchen and bath. A garage, a yard for future dog, and a big basement for storage. It also didn’t appear to have any squatters, dead bodies nor did it appear to be hiding Jimmy Hoffa. This was the best house we’d seen in…months. BUT it was over budget. It was 5k over our max cap. Our recently (but reluctantly) raised cap. AND it was beautiful, so we figured it would go for over asking. So we didn’t get our hopes up, and moved off to our other scheduled listings that night (which were mostly hell holes BTW).

That night all we did was rave about the house, and debated putting in an offer, but the more we raved the more we worried that we’d hyped the house up too much, and that our memories were failing us, and it wasn’t as great as we thought it was. So first thing the next morning we emailed our agent and got her to schedule us another viewing that night.

We hustled to the showing right after work, and damned if the house wasn’t BETTER than we remembered it! We started freaking out, and decided right then and there that we needed the house…

Stay tuned! Later this week I will post about the buying process, inspection, closing & moving.