The Storefront has potlights in a few areas on the main floor, most notably the entryway and the kitchen. They’re great for keeping the place generally looking nice and bright, what’s not so great about them is that they are perpetually burning out, and are a pain to change.  The type of socket in our lights is a tiny screw in one, which we could only find bulbs for at Rona. A two pack of bulbs cost around $14, and on average would last less than three months. When one light would burn out, the next were sure to follow within days. If we didn’t have spares on hand (which I’m terrible with!) We would often find ourselves in the dark. UGH. We are carless, so a trip to the hardware store for new bulbs would always be left to the following weekend. The kitchen at least had under counter lighting to aid with the whole seeing the food I am cooking business, but the entryway did not have any backup lighting. If you came home after the sun had set you were essentially left in the dark to take your shoes off.

The day before Halloween the entryway light burnt out (of course!) Not wanting to freak trick or treaters out, or have the neighborhood think we were shirking away from candy duty, El Granto attempted to take one of the working light bulbs from the kitchen and put it in the entryway. I say attempted, as the moment he tried to take that bulb out of the death grip of a pot light, the thing shattered into a million pieces. This luck continued until El Granto had exhausted ALL WORKING LIGHTBULBS, and our house was essentially in the dark. Needless to say Halloween was embarrassing. I over compensated by lighting EVERY CANDLE WE OWN and placing them in the entryway and front window. Hopefully our house appeared spooky, not like we forgot to pay the power bill.

That weekend, we promptly headed to the hardware store to pickup bulbs. El Granto had been suggesting LED bulbs for ages, but gosh darnit, they are expensive, and we had not seen any in person that fit our strange potlights.  We were convinced we would not be able to find new, better bulbs for our lights, and we would resort to replacing ALL the pot lights.

I left El Granto alone in the lighting isle at Home Depot (dangerous), and went in search of supplies for another project.  When I returned, expecting the worst, I found El Granto with childish grin on his face. He had managed to find not only bulbs for our lights, but LED bulbs. Philips MR16 LED bulbs. Ones that promised to last for longer than three months, and avoid us looking like the neighborhood weirdos without lights. I was skeptical. We hadn’t been able to find iridescent or florescent bulbs in this socket size, how could he really have found well priced LED ones? But after taking apart packing in the store (yes, we were THOSE people.) The light bulbs looked almost exactly the same. Except the new ones were a tiny bit longer. We took a chance, and bought enough bulbs for the main floor. They weren’t cheap, but definitely not as expensive as I thought. We have 5 pot lights, four in the kitchen and one in the entryway. 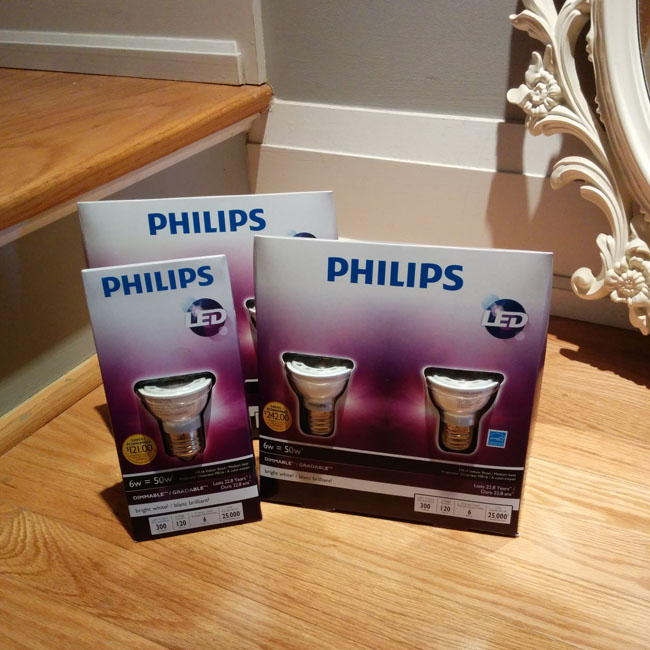 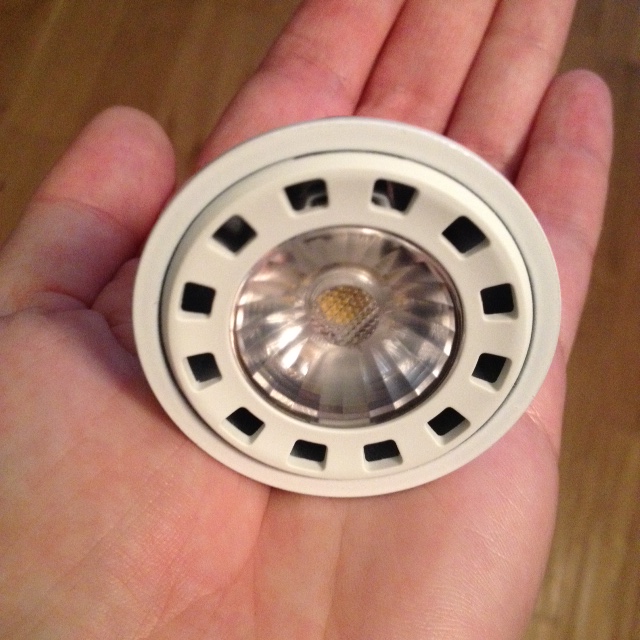 We purchased two 2 packs, and one single, and our total came in at just over $75 before taxes.

Back at home, El Granto set to installing them. After reading the package, it says they cannot be installed in closed light fixtures. Our pot lights had a glass cover at the bottom, which we decided to remove. It would look exactly the same (the glass was completely clear) and hopefully that would let out the heat better (perhaps that’s why our bulbs went so fast!?) as well as give us a bit more space in case the new slightly longer bulbs were a really tight fit. The new bulbs installed quickly and easily (no problems with the length). 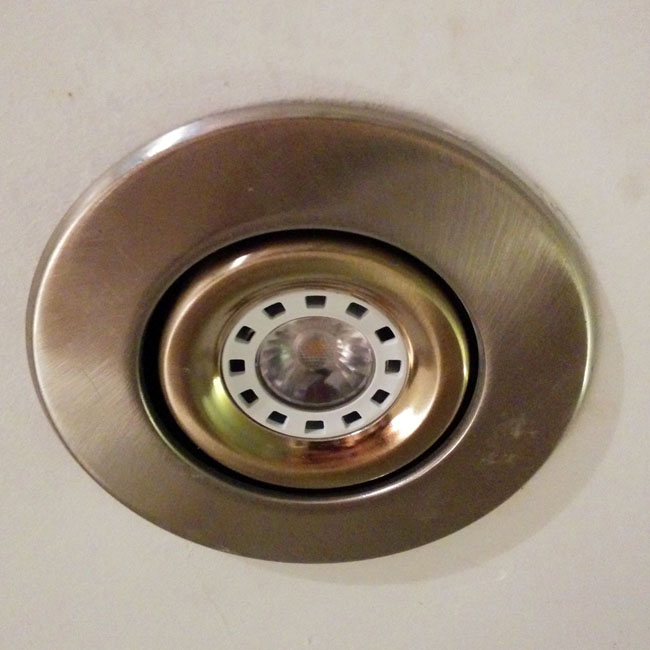 The color is a nice bright white. The kitchen receives a lot of light from the front storefront window, and the bright white works perfectly with that natural light, without being too blue, or industrial feeling.

After living with our new potlight LED’s for a couple months, we received a sample of the Philips SlimStyle LED bulb in the mail. This one has a regular light bulb connection, and we decided to try it in a lamp in our bedroom. 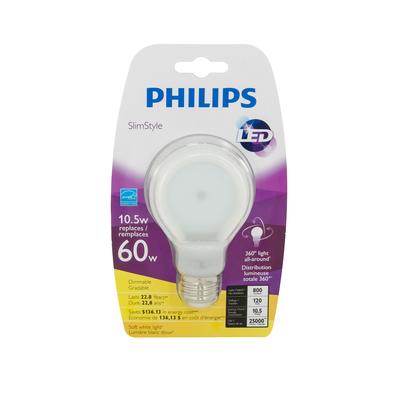 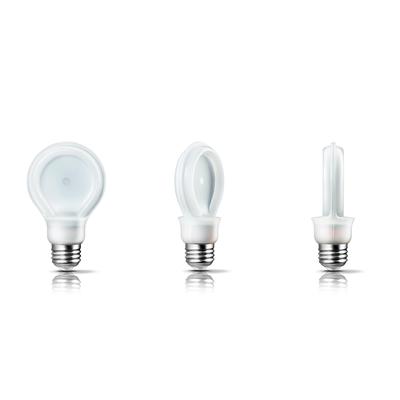 El Granto has a desk lamp for a beside lamp. It is nice and manly, but the current bulb  is a CFL that is a gazillion watts, and laying in bed it shines directly in my eyes. It’s like a fog lamp. It was unattractive, way too bright, and not a very nice color. That lamp was the obvious choice to try out the the SlimStyle bulb.

The SlimStyle knocked it out of the park. It has a nice soft light, great colour, and looks nice in the lamp (as opposed to the CFL that stuck out past the end of the shade with its weird looking tubes). It also dims in a neat way when you turn it off. 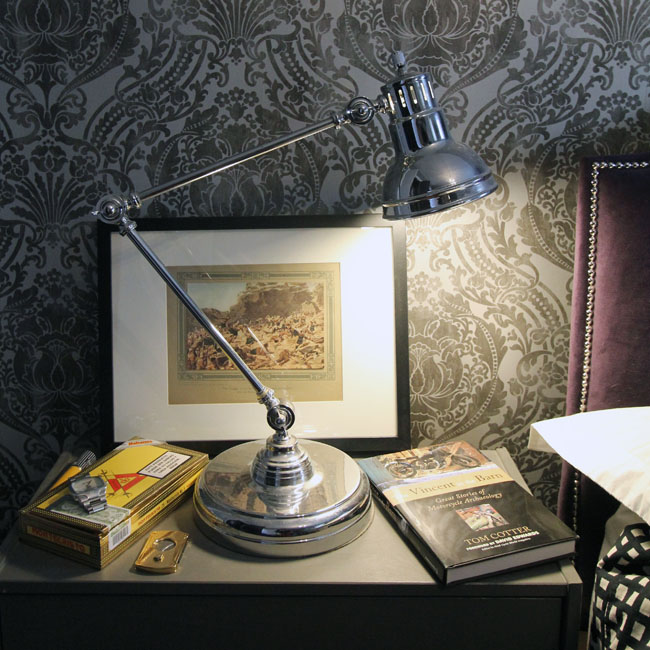 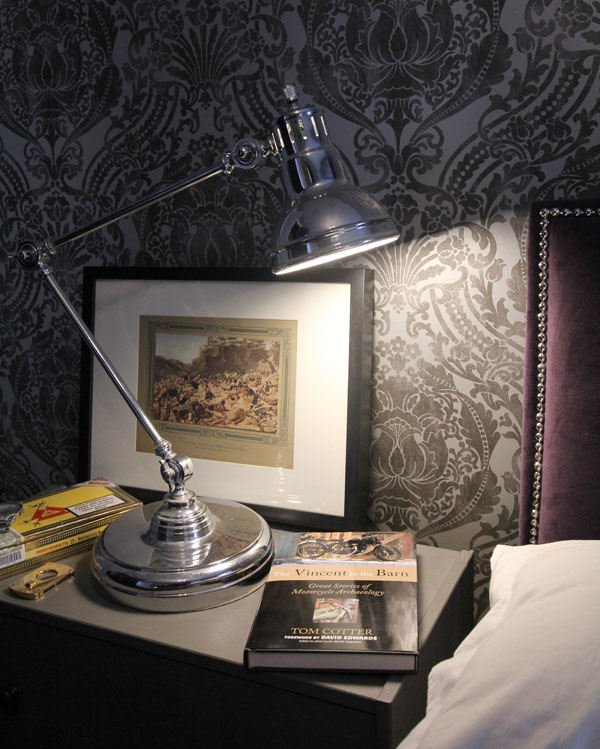 Disclosure: The SlimStyle bulb was a sample that we received for free. We paid out of pocket for the potlight bulbs, and we did not receive any compensation for this post. As always, all opinions, words, typos, poor grammar and overuses of the word awesome are our own.