I apologize for the lack of post yesterday. I was in bed recovering from having accidentally ingested gluten. For those of you who don’t know, I have Celiac Disease. Gluten is my enemy, and now that I have been gluten free for six months, when I accidentally eat gluten, my body goes into overdrive to fight it off, and I get very very sick. 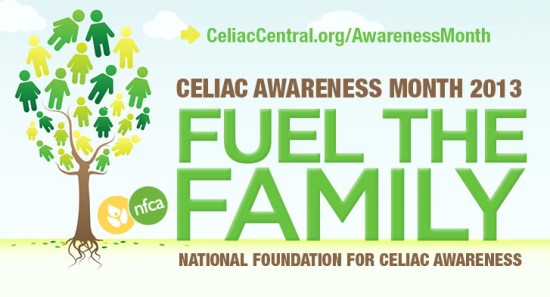 May is Celiac awareness month, and I wanted to take a moment to spread a bit of Celiac information, to help those who may think that they have Celiac disease. Or if you have friends or family that have been diagnosed, I hope this will help you understand it a bit more. An estimated 1 out of every 133 people has Celiac disease, but only about 3% have been diagnosed. The likelihood is that each and every one of you knows someone who is affected by Celiac Disease or a gluten intolerance.

What is Celiac Disease? Celiac Disease is an autoimmune disease. Your body sees gluten as a poison and tries to attack it, often doing incredible damage to your body in the crossfire.

What are the symptoms of Celiac? Celiac has a variety of symptoms, from “tummy trouble”, weight gain and/or loss, bloating, a red itchy rash, malnutrition and even infertility. Here’s a symptom checklist.

Gluten is the elastic protein found in some grains such as wheat, barley and rye.

Is there a cure?

No, there is no absolute cure, and the only treatment is a life long gluten free diet.

Do Celiac’s just have to stop eating bread?

Bread is one (obvious) source of gluten, but there are many more you might not think of. Wheat and gluten are often used as binders or thickeners, so things like sausages, soups, sauces and spices might contain it. It’s in beer, malt vinegar, most cereals, soy sauce, and a lot of processed foods. It’s even in some medicine!

What is cross contamination?

People with Celiac can react to as little as a crumb of gluten. That means that Celiac’s cannot use the same toaster as one that’s been used to toast wheat bread, and they can even react to cutting boards and baking sheets that have been in contact with gluten. Heck, I reacted to tandoori roasted eggplant, because naan bread had been cooked in the same tandoor oven. If you have a Celiac friend or family member, please ask them before making any GF foods for them. As much as they appreciate it, you could unknowingly be making them sick. When someone is diagnosed with celiac disease, they are told to replace their toaster, wooden utensils and cutting boards, and any porous bakeware/pans  or nonstick ones with scratches on them. Silicone spatulas can also harbor gluten, as can wood counter tops. (It sounds extreme, I know, but its true!) If you want to cook for a GF friend, consider buying them a treat made in a GF facility (like a baked good). Or bringing ingredients to their house for dinner such as meats, vegetables and cheeses.

Another cross contamination situation to be aware of is double dipping. If you butter your toast, then go back to the butter dish with the same knife, you are contaminating the butter. Same goes for jams, dips, mayo, peanut butter, and any other spreadable or dippable condiment.

Fast food oil is also an issue. If a fryer has been used to fry onion rings, or battered chicken/fish, it will contaminate the french fries with gluten. Cross contamination is a Celiac’s biggest nightmare, as gluten really is everywhere and there’s no way to tell if something is contaminated until it’s too late!

There’s good news though! Every day people are all becoming more gluten aware, and companies are doing their best to make good, affordable gluten free food. More and more restaurants are training their staff about gluten, and I hope one day soon I will be able to go and safely eat at any restaurant I like. Until then, I keep a Larabar in my purse at all times!

For more information check out: